Returns are free and extended until January 6th! 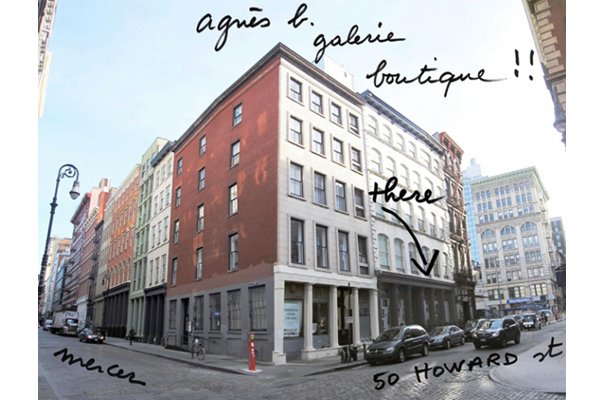 A boutique, a gallery, a new space for agnès b.!
Since the opening in April 2011, the agnès b. Galerie Boutique located at 50 Howard Street in NYC has served as a unique mix of fashion and art. One part dedicated to men’s and women’s collections, including ready to wear clothing, bags, and accessories, and the Artists T-shirts collection. And one part dedicated to showcasing contemporary art, in the form of photography, paintings, video, books, or even sculpture. 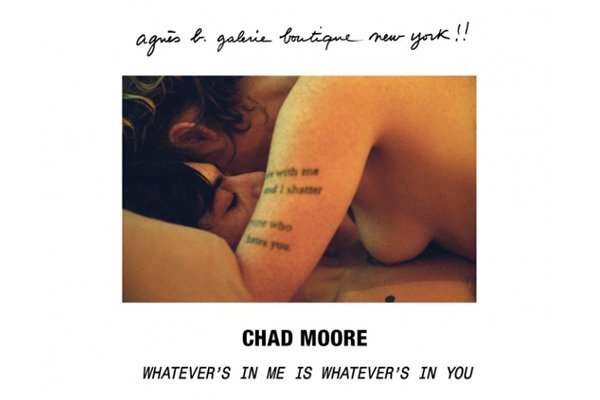 Whatever's in me is wathever's in you

The color chromogenic prints of the American photographer Chad Moore taken from 2011 – 2017 are shown in the agnès b. Galerie Boutique. In all his work, Moore is portraying emotions, the beauty of our thoughts, our feelings, our desires, our intuitions. Throughout this work, you can get a sense of who he is as a person and how he uses the camera to relate to the world around him. For the exhibition Whatever’s in me is whatever’s in you, Moore will show 24 new and archival images and will debut a 78-page book of 100 photographs that will be given away at the opening. The exhibition will mark the artist’s first solo show in NYC. The idea to show Moore’s work her gallery was an easy decision for agnès b. She has long supported young and emerging artists and photographers. Previously, she has shown works by Nan Goldin and Ryan McGinley at the Galerie du Jour in Paris and Olivia Bee at the Galerie Boutique in New York.

Coinciding with the publication of WHQ, a new book of photographs by New York artist Craig Costello, which features portraits of over 50 artists and friends who visited the Krink studio from 2014 – 2017, affectionately referred to as “The WHQ.” The 96-page book includes a foreword by fellow artist Stephen Powers. WHQ is a glimpse into a culture of creatives, showcasing their style and personality. Each photograph was made in front of the studio’s door, which became the established set. The door served not only as a static backdrop, but also a colorful, collaborative canvas. Curated by Costello, the door gradually collected the marks left by friends invited to write and draw using Krink markers. The door, now a completed work, will be installed and on view at the agnès b. Galerie Boutique in NYC, April 6 – May 28, 2017.

agnès b. Presents the “Downtown Divas” exhibition, showing a series of Polaroids taken in New York at the end of the 70s and at the beginning of the 80s by the stylist and French-American underground photographer. The works represent iconic figures of the downtown art scene of New York, as well as the self-portraits and other images transformed by hand by Maripol, either deformed, colored or cut. Often described as the “80s culture club guardian,” it is equipped with her faithful Polaroid SX 70 that Maripol documented casually and with style, one of the most vibrating moments of the New York artistic history. 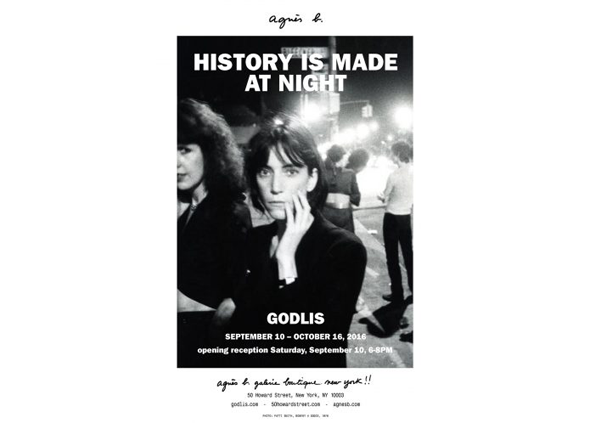 History is made at night, Godlis

The photography exhibition “History Is Made At Night” by David Godlis coincides with the release of his photography book of the same name. Forty years in the making, History Is Made At Night includes over 100 of Godlis’ most striking black and white images of the 1970’s punk bands, including The Ramones, Television, Blondie, Richard Hell, and Patti Smith, captured at New York City’s famed music club CBGB. 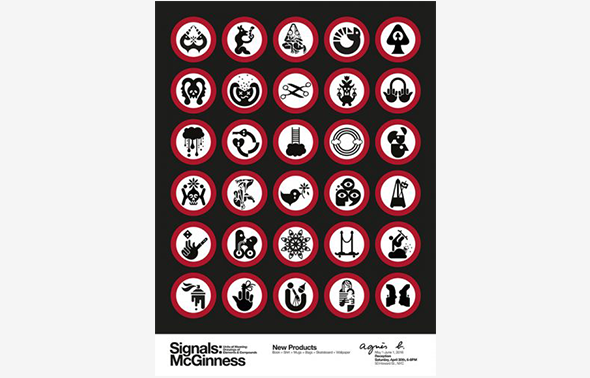 Signals, by New York artist Ryan McGinness, is an exhibition of icons used by McGinness on many different items, including a bag, wallpaper, coffee mugs, skateboards, and on a t-shirt included in the agnès b. Artist T-shirt collection. Known for his use of graphics and iconography, McGinness took the idea of his icon designs from “Signs,” his installation of fifty fabricated street signs that were installed in the streets of downtown New York in the summer of 2014. Produced by the New York City Department of Transportation, the street signs were installed along the route of the Summer Streets program, where seven miles of streets are designated car-free and open to the public to play, run, walk and bike. The T-shirt McGinness created is a unique design with double sleeves, a short sleeve sewn over a long sleeve, meant to represent the way McGinness wore his t-shirts as a teen in his native Virginia Beach. Inspired by early 90’s skate culture, the shirt was turned inside out to reveal the garment’s stitching, uneven effects and imperfections, and was printed using graphic icons in red, black, and white. McGinness’s artworks have been previously shown at the Galerie du Jour agnès b. in Paris, in the group shows What About New York in 2003, Ugly Winners in 2006, and On Verra Bien in 2016. McGinness’s solo show, Multiverse, was exhibited at Galerie du Jour in 2004.